Shotokan Karate For Everyone Ages 4+

The All Canadian Karate Union (ACKU) teaches traditional Japanese Shotokan karate to individuals and families in our ACKU Clubs in Calgary and Strathmore.
We also teach karate during the summer at our lodge on the ocean in the beautiful Great Bear Rainforest in British Columbia.

Whether you want to get in shape, learn self defense, work out with your family or want to compete internationally, we can help you with your goals.

ACKU is an independent karate entity with roots in Canadian karate going back to the 1960’s!
We belong to the World Karate Union Federation  www.wukf-karate.org
We have an extensive karate history of over fifty years.
ACKU interacts and co-operates with many other karate groups and organizations.
We have martial arts friends who live and train all around the world.
We offer tournaments within the ACKU and we also compete in local, provincial and international tournaments.
We send a team to the yearly Las Vegas Ozawa Cup Tournament, which is the largest all styles Tournament in the world. We also attend the World Union of Karate-Do Federations World Karate Championships. We are sending a team to Dundee, Scotland, in July 2023. 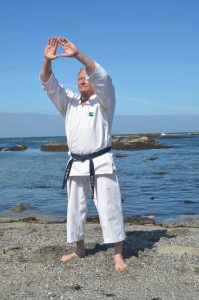 The History of ACKU

Soke Bray started his training in the first karate club in Calgary in 1964.
Soke Bray was the first Albertan to represent Canada internationally with the National Karate Association Alberta Branch (now called Karate Canada) at the Pan Americans in 1974.
He is a leader in Canadian martial arts.
All of our instructors have been trained by Soke and many of them have trained with him for decades.
Jim is proud to be a fourth generation Calgarian, earning a BA in Economics from the University of Calgary.
For more information about Soke Bray, visit JimBray.ca

Learn Karate in Your Community

What do we do in an ACKU karate class?

July 13-July 16, 2023
WUKF World’s Dundee, Scotland
The link for the hotels is up now.
We will email everyone more information.

Today at the ACKU dojo, Great Bear Rainforest, Central Coast, British Columbia. All 13 ACKU clubs are now on the web page. There is an open ACKU/WUKF class on Mondays at Nose Creek School for students competing at the World’s in Dundee, Scotland, July 2023.
See you in the dojo!

Reminder that the karate class at ACKU Citadel is today (Tuesday) this week only. No class Wednesday July 13 due to an event at the hall.